Welcome to the Jackson Foundation’s new website! We are delighted to have up-to-date features including profiles of recent grantees and programs, videos and photos of historical value and present-day relevance, such as our conferences and lectures, and this new blog. In this blog you’ll occasionally find thoughts about the current situation in Russia, with an emphasis on developments in civil society.

I have been reflecting on Russia post-Olympics, post-Ukrainian revolution. Now that the Olympics in Sochi have ended, Russia’s internal and external concerns will again rise to the surface.

The run-up to the Olympics in terms of press for Russia was not good – from security concerns, cost overruns, and migrant labor walk-outs to the outcry on gay rights and worries about gay athletes and their supporters worldwide.  Since we’ve been closely observing the deterioration of civil society in Russia for the past several years, the world’s attention has been welcome even as the problems are worrisome.  Putin’s gestures in advance of the Olympics – the freeing of oil magnate Mikhail Khodorkovsky, who was behind bars for over 10 years, as well as the early release of the young women from the punk-protest group, Pussy Riot – were also welcome, if transparent in their intent to win friends and minimize protests before the Games.

My concern had been that now that the Olympics are over, the world’s attention would shift from Russia again.  But the Ukrainian revolution and threatening behavior by Russia makes that very unlikely, at least in terms of our nation’s foreign policy concerns.  But the problems within Russia’s own walls will also remain:  a constricted space for civil society, a controlled media environment, and a manipulated political space, with Putin pulling the strings.   It is in all of our best interests that we continue to urge Russia to develop stronger protections for all of its citizens  and for the region as a whole.   Our Foundation intends to keep its focus on Russia and the former states of the USSR for the long-term.  We will be monitoring Russian aggression in Ukraine closely, particularly with an eye on how Russian and Ukrainian civil societies are impacted. 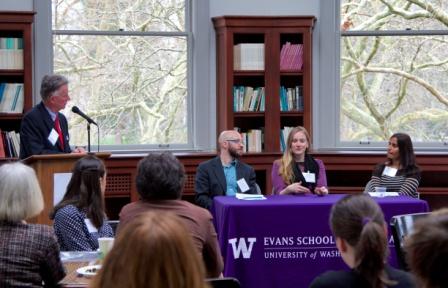 I will also comment in this space on our latest programs, such as the one in late January that we had in partnership with the Evans School at the University of Washington.  For over twenty years we have been able to help talented graduate students at the Evans School studying environmental policy.  Our goal when we began this program was to find and encourage graduate students who will become our future leaders as we tackle water and land management, climate change, energy geopolitics, clean air and water concerns – and all sorts of environmental resource challenges that we could not have foreseen at the time.  Over the years we have heard from many of the students about the impact of their fellowships and how financial support allowed them to focus more on their classroom work and policy interests.  Allison Kelly received the Jackson Environmental Policy and Natural Resource Management Fellowship after serving as a Peace Corps volunteer in Panama, where she worked on a program to better protect the buffer zone of a unique cloud forest and help preserve the rare species found in the forest in perpetuity.  She excelled in her Master’s work and began a Ph.D. at the Evans School.  Another Fellowship holder, Meg Boyle, was a founding member of the Energy Action Coaltion and the Climate Campaign in Maine before beginning her studies with Fellowship support.  She has also worked as a global warming policy specialist for Greenpeace USA.

It is our hope that many of these students will help become the future leaders who help us solve our nation’s challenges on the environmental front, carrying on the towering legacy of Senator Jackson in this field.

We will welcome hearing your views and urge you to comment on our work and the Jackson legacy in action.