The Jackson Foundation and the Wilson Center’s Kennan Institute jointly sponsored a timely conference last week in Washington, D.C., focused on sanctions as a tool of American foreign policy:  Do they work?  Why are some sanctions more effective than others?  When do they fail?  What are the unintended consequences of sanctions policies?  The conference brought some rigor to often politicized discussions about sanctions.  Speakers assessed sanctions from a historical perspective in an effort to determine what has been effective and why.  Panelists then explored current-day dilemmas facing Congress and the Executive Branch – specifically, Iran, Russia, and Cuba. 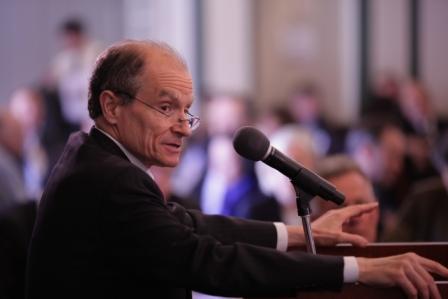 A few themes emerged.  One, voiced by Ambassador Daniel Fried, Coordinator for Sanctions Policy at the U.S. Department of State in his keynote address and echoed by others throughout the day, is that multilateral sanctions offer the most effective policy.  Working together in coordination with other nations is the best recipe for success – with U.N. Security Council sanctions as the “gold star” of sanctions policy.  When the U.S. and Europe joined together to sanction Russia for its Ukraine aggression, for example, that policy had a better chance of hitting the desired target.  Least effective, on the other hand, are unilateral sanctions – think U.S. sanctions on Cuba.

Second, sanctions historically don’t work well when aimed at regime change or at an authoritarian government.  Those sanctions tend to spur a popular backlash in the country being sanctioned.  On a panel I moderated that took a historical look at sanctions, Daniel Drezner of the Fletcher School of Law and Diplomacy at Tufts University called this “rallying around the flag.”  And Ted Henken, of Baruch College, CUNY, a specialist on Cuba, quoted Raul Castro to this effect, “The more you punch us and kick us, mas revolucion,” he said.  “Instead of promoting human rights and weakening the government, sanctions on Cuba have done the opposite,” Henken concluded.

Finally, the conference explored the popularity today of so-called “smart sanctions,” which target financial services as well as specific industries and individuals closely tied with the sanctioned government.  According to Ambassador Fried, “Sanctions should hit where they have the right balance of impact: hit the target of sanctions, not us and our friends.”  Richard Perle of the American Enterprise Institute and a Jackson Foundation Board member said that “smart sanctions are possible in a way they never could be before” and argued that “they had undoubtedly driven the Iranians to the negotiating table.”

As John Hempelmann, Foundation president, said in his opening remarks, “the issue of sanctions holds special resonance for the Jackson Foundation, given the historic Jackson-Vanik Amendment.  That legislation provided a new approach to foreign policy that explicitly linked America’s human rights ideals with economic relations through targeted sanctions on the USSR.”  It also gave the sanctioned party a very clear path of what it could do to get sanctions lifted.  Forty years later, we heard that sanctions with a very clear policy goal – and incentives to get them removed – will be the most likely to succeed.

Following the event the Wilson Center conducted interviews with some of the panelists on their perspectives on sanctions.  View them here.