Radha Friedman is a 2017 Jackson Fellow, a former member of the Foundation’s Board of Governors, and has now launched a podcast. 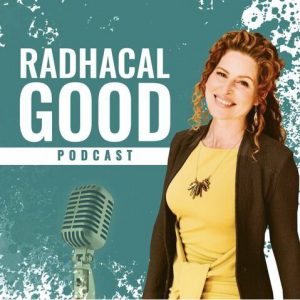 This March, on International Women’s Day, I launched a new podcast: Radhacal Good. It’s a play on my name, as well as a way to help us all do our most “radical good” by aligning our values with our money—pausing to consider where we spend, invest and donate.

Thanks to support from the Jackson Foundation, I was one of several fellows who were able to participate in a podcasting course shortly before the pandemic. (I was in good company alongside Tamara Power-Drutis who, together with Lylianna Allala, assembled a team to produce the Growing Old Project.)

My podcast idea began after two decades working in human rights and social justice organizations across 60 countries and watching what works and what doesn’t. I saw millions invested in projects that caused more harm than good, and I saw tiny seed grants that seemed like a drop in the bucket that changed entire nations. The clear takeaway for me was that the best investment we can make in the social issues we care about is to invest in women and girls—particularly women of color, women who are LGBTQ and women with disabilities— because they have historically had the least access to resources and have been the engines behind every social progress movement from civil rights to labor rights to fair elections.

But as the pandemic progressed, the inequities in our systems, structures and institutions—systemic racism, sexism, homophobia, transphobia and ableism—only grew stronger and the wealth gaps continued to widen. We know that women and girls have been disproportionately affected by COVID, particularly women of color, women who are LGBTQ and women with disabilities. We know that women held the majority of jobs lost during the pandemic (a “she-cession”) and that access to healthcare is anything but equitable. We also watched as countries with women leaders and strong gender equality laws fared significantly better with COVID infection rates. All the evidence seems to point to a need for greater investment in women…and yet, the opposite is happening.

Add this to the fact that less than 2% of all philanthropic donations in the U.S. go to organizations focusing on women and girls, and less than 2% of venture capital goes to women-owned businesses, and it’s clear to see we have a big problem. We cannot make progress on our most important social issues when we leave half the world behind.

I started the Radhacal Good podcast to talk about how we can close these gaps with some brilliant and inspiring people who are already doing it. And I have two important takeaways.

First, I want us to reclaim the word philanthropist. Philanthropy has existed in every culture for thousands of years, yet most people believe their gifts are too small to matter. They matter. Of the hundreds of billions that were given to charity last year, 80% came from small donations.

Second, this podcast obviously has a bent on investing in women and girls, but it also has a focus on encouraging more women to invest. That’s because a core piece of the wealth gap is an investing gap. (To learn more about the gender investing gap, check out the episode with Tracy Gray, who is on her way to becoming the first Black woman to raise a $100 million VC fund). Here’s why this matters: An unprecedented amount of assets ($30 trillion) will shift into the hands of U.S. women in the next few years. And over 80% of purchasing decisions are made by women (about $20 trillion in consumer spending). Imagine what the world could look like if women used their economic power to bring more equity to their communities?

As the world slowly begins to build back better from the pandemic, we have an opportunity before us to use our dollars—our spending, giving, and investing—to fill in the gaps of inadequate government funding and address the often unrecognized needs of women and marginalized groups. If you’re looking for a dose of inspiration on how to take action, then this podcast is for you.

You can listen to the podcast on Spotify, iTunes, iHeartRadio or wherever you like to listen!