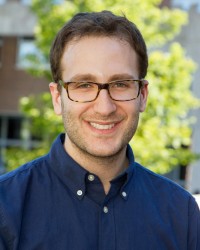 Congratulations to Daniel Bessner on his promotion to Associate Professor with tenure by the UW Provost. Two years ago, the Jackson Foundation celebrated Bessner’s induction as the first Anne H.H. and Kenneth B. Pyle Professor in American Foreign Policy. The professorship was established with a major gift from the Jackson Foundation. Dr. Kenneth B. Pyle and Senator Jackson shared a remarkable professional and personal rapport founded on their joint commitment to a strong and deeply knowledgeable American foreign policy community. We are so pleased that Bessner has already risen up the UW ranks.

Professor Bessner published his first book, Democracy in Exile: Hans Speier and the Rise of the Defense Intellectual, last April. It has garnered positive reviews from diplomatic and intellectual historians, as well as in more popular venues such as The Los Angeles Review of Books. Daniel is hard at work on his next work about the history of the RAND Corporation.

Taking a page out of his own history book, Bessner is rising to the challenge of being a public intellectual, writing for public consumption in The New York Times, The Washington Post, The Guardian, Boston Review, and elsewhere. These pieces have engendered significant interest in the field and on Twitter, where scholars and experts frequently respond to and engage with Daniel and his ideas. We applaud this outreach, just as we recognize the research that underlies it. This is the Scoop Jackson ideal: scholarship and activism, expertise and outreach beyond academia. Daniel embodies it.

Professor Bessner has committed himself deeply to being a public historian. In the footsteps of both Ken Pyle and Senator Jackson, he is forging his own path forward. Congratulations, Daniel!