The Henry M. Jackson Foundation periodically sponsors a lecture series that holds particular importance to it, as it honors the relationship between Senator Jackson and one of his long-time counselors in the environmental resources management and land use fields, Bill Van Ness.  Van Ness also served as the president of the Jackson Foundation for two decades. The series, the Jackson-Van Ness Lectures on Leadership, recognizes some of the key qualities shared by the two men, who worked together on legislation central to the Jackson legacy, including the National Environmental Policy Act.  Previous lecturers have included The Honorable William Ruckelshaus, one-time Attorney General of the U.S., and former Senator Slade Gorton.  A full list is here.

In late November, the Foundation was fortunate to hear the latest lecture in the series from Ana Mari Cauce, the president of the University of Washington, on the subject of “Leadership for a World in Flux.” This timely lecture – held a few weeks after the stunning presidential election results — was a thoughtful reflection of Dr. Cauce’s own evolution as a leader and her advice for the thousands of young people under her charge.  As Foundation President John Hempelmann said in his introduction of Dr. Cauce, the new university president has shattered many glass ceilings in her own career, rising through the ranks to become the UW’s first woman, Latina and openly gay president one year ago.  As Cauce herself mused, she may not come to mind as a typical university leader.

President Cauce emphasized that in a university setting, leading with a more democratic and collaborative style is a given. Yet certain situations demand unilateral action, for example during a crisis or when a situation is critical, or when an issue represents a “non-negotiable core value.” She also highlighted the role of authenticity in leadership.  Authentic leadership requires self-awareness, self-monitoring and impulse control – all familiar concepts to a president who trained as a clinical psychologist.  She counseled, “Self-monitoring is so essential because as a leader your behavior sets the tone.” 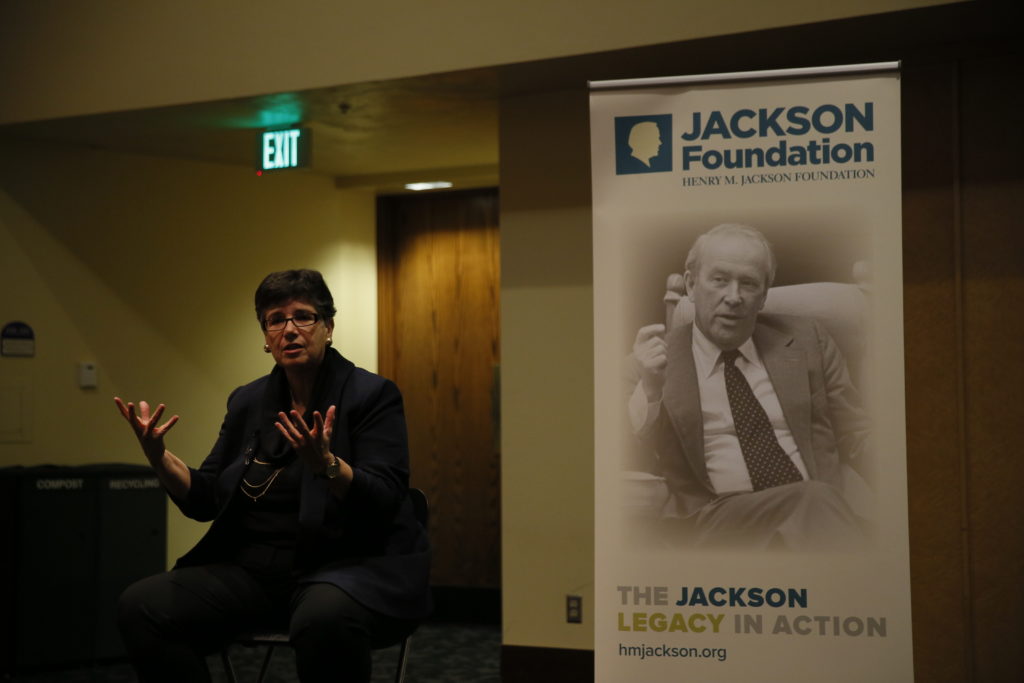 President Cauce has considered how to develop leadership skills in the next generation at the University, especially for those students who, like herself, may not be obvious leaders – either to themselves or to others.  She seeks to teach students “to practice leadership in whatever they do.”  Cauce concluded that, “Preparing as many people as possible with the skills to lead – lead themselves, lead their communities, to lead through crisis and to lead change will make our whole society stronger and, with a little luck, produce the kind of leaders our country and our world needs – now more than ever.

Please enjoy the audio from President Cauce’s lecture here or the full transcript on our website.  We have also linked to her own blog about the lecture here.