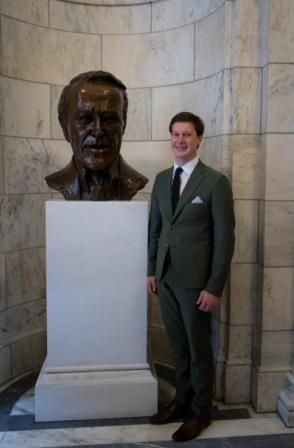 Andrew Lewis, one of the 2016 Jackson Leadership Fellows, chose for his project to analyze and write about an important Jackson achievement – the Land and Water Conservation Fund – addressing both its significance and its future funding and standing in Congress. As a recent graduate from the UC Berkeley School of Law, Andrew felt naturally drawn to legislation close to the heart of the Jackson legacy. Andrew has always been heavily involved in Washington State politics – starting at the early age of 14 as an intern in Washington State Senator Patty Murray’s re-election in 1994! His legal interests include environmental law, so he was attracted to the battle over the Land and Water Conservation Fund’s future. Senator Jackson introduced the original Land and Water Conservation Fund (LWCF) Act at President John F. Kennedy’s request. For over 50 years, the Fund has contributed resources to parks, wild spaces, recreation areas, and the natural heritage of our country. A small portion of oil and gas royalties funds the LWCF, as Jackson intended it to do, making the funding source smart economic and environmental policy.

Andrew’s paper, published in the Ecology Law Quarterly in spring 2016, explains the history of the LWCF and its purposes, namely “to preserve, develop and assure accessibility to outdoor recreation resources for the American people.” To do this, Congress authorized a $900 million annual appropriation to fund the LWCF. Historically, however, while the Fund has received resources, it has never received the full amount intended by the legislation. Andrew shows the LWCF’s success in driving conservation and economic growth despite its dwindling funding from Congress over the years.

Most important, Andrew describes the current state of the LWCF as “tenuous.” Congress gave the Fund a temporary, three-year extension and an appropriation of $450 million. Foundation President John Hempelmann mentored Andrew and provided him with careful editing as well as a big-picture political perspective on the legislation. Both John and Andrew expressed relief that the Fund’s life has been extended, but they are concerned about its future.  Andrew outlines options currently under discussion in Congress – led by Washington State leaders – that would provide permanent funding for the LWCF.

The paper does an excellent job of clearly assessing the past and future prospects of this important piece of Jackson’s environmental legacy, and the protection of our nation’s natural resources. Bravo to Andrew for his excellent piece and for landing an article in a prestigious law journal – all while finishing law school.