In an effort to showcase remarkable and effective leaders in all fields of our society, the Henry M. Jackson Foundation established the Jackson-Van Ness Lectures on Leadership series in 2009.  The latest lecture, featuring Lt. Gen. Stephen R. Lanza, commanding general of I Corps at Joint Base Lewis-McChord in Washington State, was inspirational and motivating for the packed crowd at the University of Washington.  The lecture hall was filled with young people in uniform, the midshipmen and women of the University’s ROTC, as well as with other students, members of the community, and representatives from all of the armed forces. 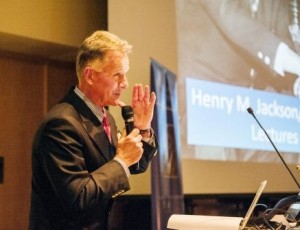 John Hempelmann, Foundation President, introduced the general by explaining that  “the Foundation believes deeply in the power of excellence in leadership.  That is why the Jackson-Van Ness Lectures on Leadership are a special occasion for us, linking and honoring two men who exemplify public service leadership.”  He provided some background on the Jackson-Van Ness series.  “Bill Van Ness was the quintessential staff person for Senator Jackson, embodying quiet integrity, exemplary skills and intellect, and an extraordinary ability to envision and craft policy recommendations that helped Senator Jackson achieve major legislative victories.” 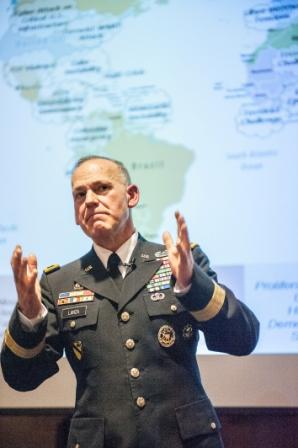 General Lanza, who has been described by the Secretary of the Army, John McHugh, as “a tested warrior, a proven leader, and an effective, tenacious commander,” is known for his dedication to his corps of soldiers.  Lanza described the challenges facing military leaders: they make decisions involving conflict within a high-velocity environment.  In order to be effective, military leaders must be able to adapt to change and unpredictable situations, such as the recent terror attacks in Paris, or the Ebola epidemic, or Ukraine-Russian fighting.  A true leader will be empowered, engaged and accountable, while anticipating that his or her mission will change in dramatic and unpredictable ways, Lanza emphasized.

General Lanza shared that the military is a valued-based organization.  “I can’t recruit leaders from a head-hunter,” he said.  “We have to build it from within.”  That requires developing trust, character, competence and commitment.  In answering a question regarding the balance between competence and character that Lanza referenced, the general stressed that competence can be taught, but character was essential in ensuring that the men and women of our nation’s military are able to respond effectively in the field as well as at home.

We are pleased to share with you an audio recording of Gen. Lanza’s presentation and we will have a publication printed in the next few months.  In the interim, we would also like to highlight two articles about the event; one, from the University of Washington Daily, and the other, from NorthWestMilitary.com news.