I had the privilege this week of attending the first screening of a remarkable film made by two young people, Laura Stewart and Julian Kane.  Laura is one of our Jackson Leadership Fellows, and the film was her project for the Fellowship.  Julian is a graduate student at Antioch University.  The film, “Our Story:  Climate Justice and Environmental Justice,” showcased over twenty people from our community here in Puget Sound, voices that are not often heard in the debate and discourse on climate and the environment.  Laura’s intent in creating the film was to bring to the front of the table those communities disproportionately impacted by climate.  She interviewed leaders and activists at environmental, labor, and educational organizations who collectively raised the climate justice flag and conveyed a deep sense of urgency.  Laura and Julian were both brimming with enthusiasm and pride – as they should be – for the film that they created, for the stories they illuminated, for the discussion that their work engendered.  “We are two young people of color, and we just did it,” Laura proclaimed.

The film is inspiring, in part because it is made by and gives a megaphone to many young people, often people of color, finding allies in their efforts to save the planet from climate warming.  It is also a call to action for all of us who want to see communities of color empowered.  Short interviews in the film include Running Grass, from the Three Circles Center, Jourdan Imani Keith, from the Urban Wilderness Project, Aiko Schaefer with Front and Centered (Communities of Color for Climate Justice), and Sudha Nandagopal, from the City of Seattle’s Office of Sustainability and Environment. 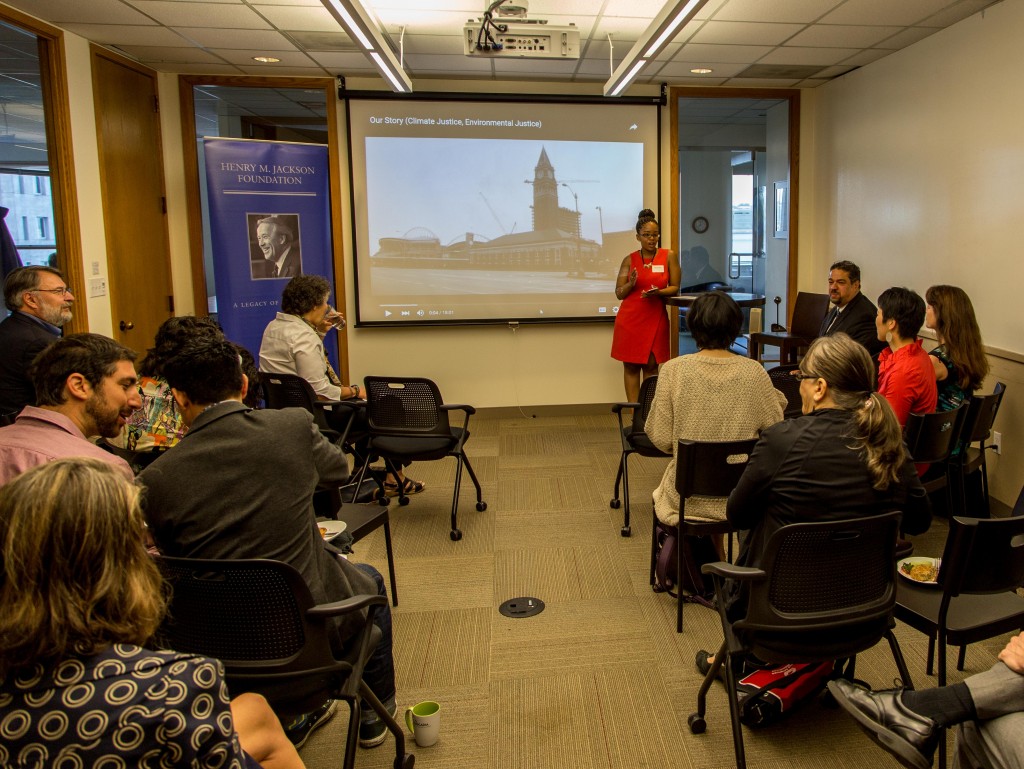 Roger-Mark De Souza, an expert on democracy, environmental security, climate and international development, and a frequent Jackson Foundation partner through his role at the Wilson Center in Washington, D.C., moderated a lively and thoughtful discussion with those present.  “What side of history do you want to be on?” one of the participants asked the film audience.  “We have an obligation to chart a cleaner future” for ourselves and our children, another argued.  The film also stimulated a broader dialogue about privilege, elites, and diversity.  Audience members felt the film should be seen widely, and Laura agrees.  She is urging people to share it on social media and take ownership of it so it can be viewed as much as possible.  There is also talk of a lesson plan, as early viewers felt that the film speaks in an accessible manner for young students.

We are proud of our Jackson Fellow Laura Stewart – she has made a film that will get people talking, and acting, on climate justice.  Congratulations!

1 thought on ““If we want justice, everyone’s voice needs to be heard.” Why Climate Equity Matters”