Mónica Guzmán is the Director of Digital & Storytelling at Braver Angels, co-founder at The Evergrey, a 2019 Jackson Leadership Fellow, and author of the book, I Never Thought of It That Way: How to Have Fearlessly Curious Conversations in Dangerously Divided Times, released on March 8. We sat down with Mónica to ask her a few questions and came away inspired and curious for more. 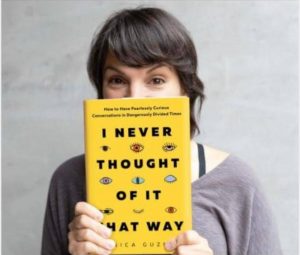 What sparked the idea for this book?

There were several threads. The first was connected to my Jackson Fellowship. When I came into the Jackson Fellowship Program, I was already obsessed with the political divide manifesting in the world. Not from a policy perspective but a communications perspective. As a journalist, I think of it as my mission to help people understand each other. And I could tell that something about this particular divide was becoming so toxic that, in my view, it was getting in the way of people understanding each other, even hearing what others were saying, getting past their assumptions. So, when I came into the Jackson program, I knew I wanted to do something around that.

I will never forget that I was sitting with Tim Burgess, one of my mentors through the program, at a coffee shop, and I showed him the binder for my project. On the front, I had written, “I never thought of it that way.” Something about that phrase just felt like it captured what I wanted to explore. And Tim looked at that and said, “Oh that’s it, that’s it, you got it! When people can say ‘Wow, I never saw it that way,’ something magical happened, something a bit rare these days.” So Tim validated what would eventually become the book’s title.

Another deep thread is my relationship with my parents and family. I am a Mexican immigrant and came to the US in 1988. I grew up thinking that my parents and I were probably politically aligned. Then they became citizens in 2000, and a lawn sign for Bush/Cheney appeared on the office wall. I thought, “This is interesting, but really guys?” I was a liberal democrat. That started 20 years of arguments, as our politics became more intense. They were very clear in their support for Trump, and I was very clear in my lack of support for him.

What did it for me on that thread was talking to my fellow liberal friends in Seattle, who would talk about people who voted for Trump as if they were complete scum. And I knew that wasn’t true. I understood why they believed that, but I started thinking something is wrong with the way we look at each other, and it is something that we need to fix.

What would you hope that people would take away having read this book?

I have had people come up and say, “Look, some people are not that curious. I have tried building bridges with my family members. They didn’t walk over the bridge to me, so I burned the bridge and will never do it again.” I hear that this can’t happen; we can’t wake up suddenly and be curious. What I tell them is: good, that is not what I expect.

I am hoping – and I think it is possible – for each of us to be one step more curious than we are already. That’s what I hope people will take away from the book. If I am in a conversation where I disagree with them, all I want to do is tell them my opinion right now. Instead of jumping in with my opinion, I will ask one more question. If that’s the takeaway, then great. You could just push the boundary a bit, ask one more question, have one more conversation. If we are all just a bit more curious, it adds up and impacts our society.

Start with “How did you come to believe what you believe?” Or a version of that question. We are often tempted to ask, “How could you believe what you believe?” or “Why do you believe this?” At that point, understanding stops becoming the goal. And if we don’t make understanding the first goal, at a time that we are this blind to each other’s true perspectives, we will never have arguments that make progress. The second most important question is, “What are your concerns?” When they answer, then ask, “What else?” There is always something else. These are the most fruitful questions for understanding people without falling into the temptation of judging them.

Which of the Jackson values spoke to you as you developed this book?

The four that resonated the most with me were inquisitive, pragmatic, open, and honest. I have a chapter on honesty. The interesting one for me is pragmatic. I have been thinking about that a lot because one of the reasons to say no to these ideas is that it will ultimately do some harm. People believe that they need to do what our side believes in, but that isn’t pragmatic. When do you become creative, build together, and engage in the public good? When we look at the long game, if we don’t restore some civic trust from the ground up, and we don’t do some hard things at the bottom to start working on that in our own lives, how do we expect our politicians to model that behavior for us. They reflect us.

Senator Jackson was pragmatic. I loved reading about him before I applied to the Fellowship. Through the program, we met people who knew and worked with him. I was so touched by how they said he made them feel. Senator Jackson made people who worked for him feel that he was there to help them meet their goals and made sure that they were heard—pushing them forward. What a fantastic way to do politics. I look around now and wonder what it would be like to have more Jacksons who were inquisitive, open, never believing that they had all the answers, learning, respectful, and not condescending.

What’s next? What gives you hope?

We are turning things around already, both on a small scale and large scale. Because of my work with Braver Angels, I am in a place if there are signals, I can see them. There is a movement afoot. Driven by exhaustion of the status quo, people are more open to openness and curiosity. Seeing voices come up and ideas circulate. That gives me hope.

If you would like to hear more from Mónica Guzmán, take a look at her recent TEDx Seattle talk, or look at her book. The Foundation is pleased to be an event host at Town Hall Seattle on March 22, 2022, for a discussion between Mónica and political satirist, David Horsey. You can learn more about her work at https://reclaimcuriousity.com.