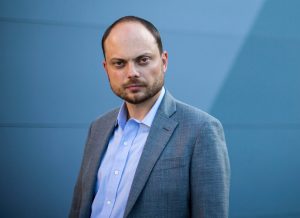 The Jackson Foundation joins our partners Human Rights First and the Free Russia Foundation in calling for the immediate release of Vladimir Kara-Murza. Russian democracy activist, historian, and critic of Vladimir Putin’s regime, Kara-Murza serves as senior advisor to Human Rights First. He was arrested near his Moscow residence last week shortly after CNN broadcast an interview with him. Kara-Murza was a close associate with Russian opposition leader Boris Nemtsov, and was poisoned twice for his involvement in the opposition movement. Kara-Murza has also been pivotal for Global Magnitsky sanctions, which target human rights violators and corrupt government officials, playing a key role in the adoption of legislation in the United States, the European Union, Canada, and the United Kingdom.

A contributing writer at The Washington Post, he wrote this opinion piece from detention. We hope for his safety and call for his immediate release.