As part of the Foundation’s  ongoing interest in showcasing new political voices, we brought David Burstein to Seattle last week to speak to an interested and diverse audience. 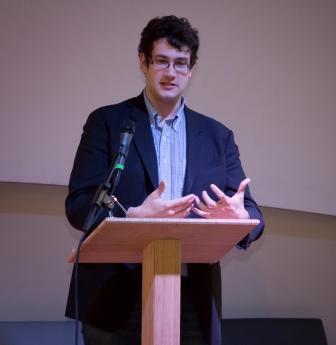 As CEO of Run for America, David is  working to recruit, train, and elect a new generation of highly talented leaders innovators, social change agents, entrepreneurs, and outside-the-box thinkers in their bids for public office.

In Seattle, David noted that the Millennials share many of the values held by Baby Boomers, such as a commitment to a better world and engagement in the community. They also share a desire to find common ground.  He argued that just as the Baby Boomer generation has shaped the U.S. profoundly,  the Millennials — at  80 million strong, the largest generation so far — are a generation to invest in as they will become our nation’s leaders.  David described a yearning within the Millenial generation for leaders who will govern  and lead — not just fashion political compromises.  He said that the Jackson-era generation of leaders — those who were prevalent in Congress 30 years ago — accomplished a lot and should be emulated.

We came away with a renewed sense of the importance of communicating the values and leadership approach embodied by Senator Jackson, and the work of the Jackson Foundation, to the next generation.  David shared with us that it is important to continue to educate people of all generations about those leaders — including Senator Jackson — who provide important stories and examples on which people can model their own leadership.