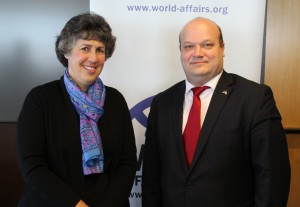 The Jackson Foundation and the World Affairs Council of Seattle convened a high-level conversation with Ambassador Valeriy Chaly, Ambassador of Ukraine to the United States before a packed room in downtown Seattle last week.  I had the opportunity to moderate the session with the Ambassador, who was forthcoming about Ukraine’s challenges – both domestic and international – over the next several months.  This conversation took place with the backdrop of Russia’s takeover of Ukraine’s Crimean Peninsula in March 2014, an act that provoked an unusually unified response from the U.S. and its European allies in the form of sanctions against Russia.  Russia also has started an ongoing conflict in Eastern Ukraine that has left 10,000 Ukrainians dead and over a million more displaced from their homes.

Given that Ukraine is facing enormous economic hardship and financial crisis in the midst of the ongoing conflict in Eastern Ukraine, the Ambassador was particularly appreciative of recent, high-level meetings that he had held with U.S. officials in Washington, DC about Ukraine as well as Russia.  Russia has played an aggressive, destabilizing role in current Ukraine affairs, apart from its role in bringing in arms and mercenaries to push for a separatist movement in Eastern Ukraine and the seizure of Crimea.  “Ukraine was faced with the choice of two partners when it became independent from the USSR.  Now the choice is only one – the United States.  Russia no longer provides an opportunity for partnership,” the Ambassador said.

Ambassador Chaly expressed his gratitude to the U.S. for its standing by Ukraine during this period, although he felt that the U.S. “did not have a vision as to where Ukraine fits within its foreign policy moving forward.”  This perhaps reflects the complex relationship with Russia and the West, and the role Moscow can still play in negotiations with Syria in particular.

Ambassador Chaly was optimistic when talking about the eventual decisions faced by European Union countries as to whether or not to continue sanctions against Russia.  “The Europeans continue to be supportive of Ukraine and I fully expect them to vote to keep the sanctions in place,” he predicted, in response to a question which noted that some European leaders have seemed anxious to resolve the sanctions issue for their own economic and political benefit.  “The European Union is also a critical partner to Ukraine at this moment,” he said.

The conversation also touched on the recent resignation of Ukraine’s finance minister, who specifically called out what he saw as the corruption endemic to the political and economic circles at the highest levels in Ukraine.  “It is not about a single person, whether he resigns or not,” Ambassador Chaly contended, noting that Ukraine has established a new anti-corruption bureau in recent days.  While European and U.S. observers are alarmed over this new development, wondering what to make of Ukraine’s commitment to reform, the Ambassador was unruffled.  “We have long-term goals and a long-term struggle,” he concluded.

He noted that he had come to Seattle in part to meet with Boeing and Microsoft executives, and also, as a reflection of the more than 60,000 Ukrainian immigrants who currently reside in the state.   In meetings with the Seattle Mayor, a possible sister-to-sister relationship with Lviv, Ukraine and Seattle was even discussed.  The interest in Ukraine was reflected in the intense audience questions which followed the formal conversation.