We are excited to post a guest blog from 2019 Jackson Leadership Fellow Mónica Guzmán, whose Fellowship experience led to a book. Enjoy this great read! -Katy Terry, Executive Director

When I traveled to Washington D.C. with my cohort of Henry M. Jackson Foundation Fellows a year ago in June, I packed my get-down-to-business notebook. The nine of us had spent 10 months here in Seattle learning about what it takes to step up big to public service, and the looseleaf pages I’d stuffed into folders weren’t going to cut it for our behind-the-scenes conversations with leaders in our nation’s capital.

We were there for the real talk — and we got it. I filled page after unruled page with it. And when a senator or legislator said something I wasn’t going to get out of my head, I jotted down their exact words:

We fellows are a diverse bunch, and everyone in my cohort came to D.C. with their own burning questions. Several wanted to level up on climate change policy. A few were gathering courage to run for office. What I asked about, over and over, is the thing that’s been fascinating and frustrating me for years — political division.

Everything from what we read to who we hang out with is shaped and skewed by the group rivalries defining more and more of American life. It’s tearing us apart, this distrust people have for anyone who sees things differently. And it’s made my work as a journalist — helping people understand each other so we can solve problems together — almost comically difficult.

Polarization is such a complex beast of a problem, I want to throw up my hands half the time, and I’m not even in politics.

The puzzle of polarization

Let’s soak in just how brutal all this has gotten in the last four years:

So back to D.C. The reaction I couldn’t capture with scribbled quotes in my notebook — the one that every leader and legislator we talked to had when polarization came up — was a deep sigh. It’s not an empty gesture. A sigh resets your face to something more genuine, as Harvard professor Steve Jarding once put it. And they genuinely shared how confounding public service becomes when you have to follow a polarized script. The dance for the tweets and the cameras. The progress half the country thinks is doom. They got sh*t done despite the gridlock. “There’s plenty of bipartisanship, you just don’t hear about it,” one legislator told us. I knew why. It wouldn’t get any clicks.

In one session, I set down my pen and put my head in my hands. Here I am looking for answers from the most powerful people in politics, and they seem powerless to dismantle the toxic systems that make their work — and our civic lives — harder.

That felt familiar. In 15 years of journalism, I’ve been in countless chats about “the media” and all that’s wrong with us. Fear mongering, clickbaiting, catastrophizing, exploiting — we’re guilty as charged. Many of us work like hell to hack something better, but we’re still throwing grabby words in your face. When non-journalists in my life turn to me for answers, I give a deep sigh, too.

Then I start asking questions.

“I never thought of it that way”

Questions, I’ve realized, bust through divisions, assumptions, systems — all the walls we put between us. They’re open invitations to knowledge. Bridges to conversation when you have nothing in common but the experience of having lived a unique human life, which is always enough.

It’s not the politicians or pundits we need to open their minds and question their assumptions. It’s each and all of us.

The most important question to ask about each other these days is “What am I missing?” There’s only one wrong answer: “Nothing.” The most important things to share are not our opinions, but the stories of how we got to our opinions. The most undervalued answer to a complex question is “I don’t know,” because it keeps the question open and invites others into the solution. “I don’t know” is an answer both politicians and journalists feel they’re not supposed to give. If they’re going to lead us through these intensely challenging times, we need them to learn how.

Partway through my Jackson year, I gathered all my notes from the fellowship and labeled the front with a phrase I love: “I Never Thought of it That Way.” Senator Henry Jackson was known for crossing divides to build thoughtful, responsive policies. Those seven words, I’ve learned, signal that a new perspective has crossed the chasm from one brain to another. They’re the prize of a virtue that’s become scarce in our media, politics, and everywhere. A human superpower I’ve worked my whole career to master, spark, and inspire. Curiosity.

The “I Never Thought of it That Way” binder has joined three shelves’ worth of notes and research for a new project: a book. It’ll be a guide to building bridges in wildly divided times, it’s due to publish with BenBella Books in 2022, and I am nowhere near done asking questions. 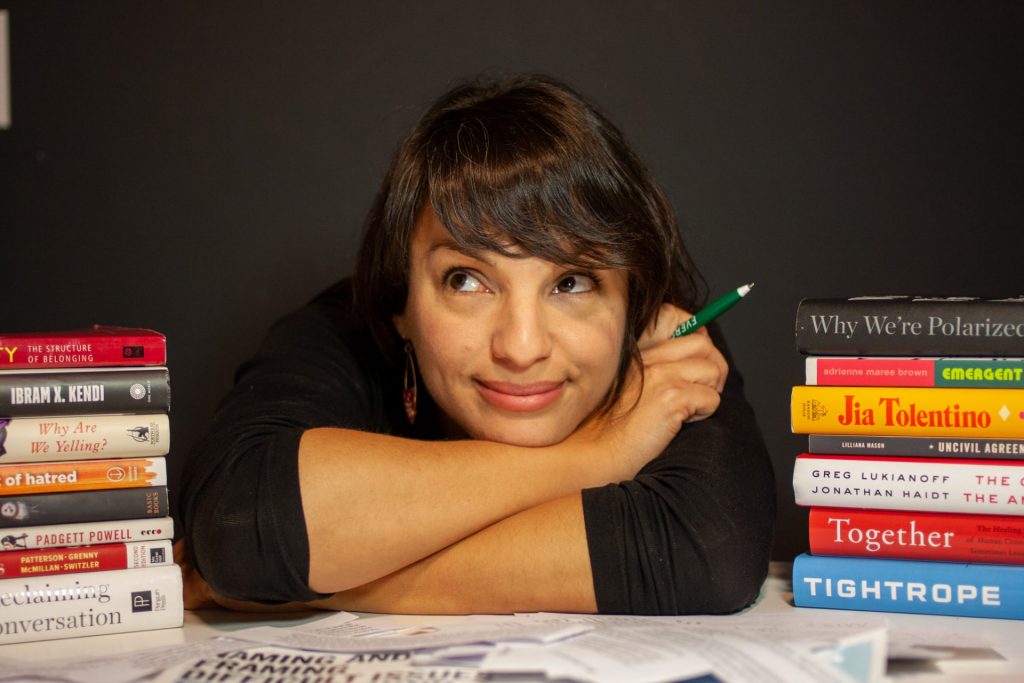 Want to get updates or get involved in Mónica’s curiosity project? Go to http://bit.ly/reclaimingcuriosity to sign up, or reach out to her at moni@moniguzman.com.