A few weeks ago the Jackson Foundation partnered with NBR on the launch of NBR’s new publication, China’s Energy Crossroads, the 2014 Energy Security Report.  We wrote about that Washington, DC event here.  Today we draw your attention to the edited audio from the session, which featured opening remarks by John Hempelmann, President of the Jackson Foundation, and Admiral Dennis C. Blair, member of NBR’s Board of Directors.

John Hempelmann opened the day by placing the topic in context:  “Secretary of State John Kerry recently described the U.S.-China relationship as ‘the most consequential in the world today. Period.’” John went on to underscore how that relationship meant that the U.S. and China must work together and strengthen their understanding of one another.  “Undeniably, energy plays a growing role in this relationship,” John concluded.  “As the world’s largest consumer of energy across a broad range of fuel choices, China is a key player in any discussion of energy security.” 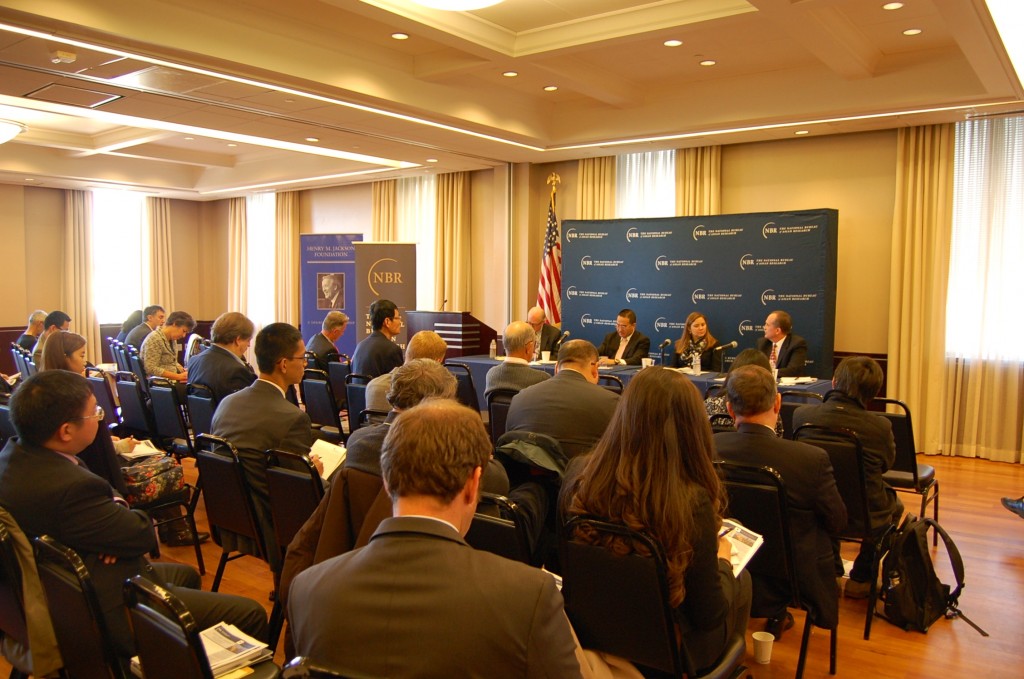 Li Bin, Counselor for Economic Affairs at the Chinese Embassy in Washington, D.C., reiterated how fundamental this issue is to the current Chinese government: “China is very serious about the shift from relying on investments in pollution-producing energy to something more sustainable.  China must strive for less emphasis on coal as well as using the direct utilization of coal in a more environmentally-friendly manner.”  Li Bin also described how pollution and climate issues have become central to politics at the local level in China:  “The reduction of emissions is now very important for local leaders.  They have signed on to targets with the central government.  If targets are not reached, there will be a conversation between local leaders and central government officials.”  Edited audio for this panel can be found here.

Craig Gannett, the Foundation’s Vice President, spoke on a panel focused on U.S.-China Cooperation on Climate Change.  Commenting on the U.S. approach to climate change today, Craig characterized the U.S. as “making clear progress, but it’s messy and non-linear.”  Reflecting on the Obama Administration’s multi-step process toward climate policy, Craig described the Administration’s climate action plan as very broad.  “The centerpiece of the policy is new regulations under Section 111(d) of the Clean Air Act for existing power plants, which call for a 30% reduction of emissions below 2005 levels by 2030.”  Craig explained that since these rules have both “inside the fence” regulation – at the power plant itself, as well as “outside the fence” – in the economy’s demands for electricity – the EPA’s ability to regulate will be challenging.  “This is outside the ordinary domain of EPA, whose core authority is large sources of emissions.  To have EPA be responsible for a plan that is economy-wide is very ambitious and legally uncertain,” Craig explained.  “There is genuine jeopardy to the ‘outside the fence’ portions of that rule.”  He predicted that the rule, which becomes final next June, with state implementation the following June or later, will eventually come before the U.S. Supreme Court.  “It may survive, it may not.  It probably depends on who the next president is and therefore who replaces a couple of aging Supreme Court justices.”

To hear the entire audio of this very interesting session, please go to NBR’s Event site.